Video with music is way catchier, . Even the coolest visuals are raw without sound. Audio effects add liveliness and color to the video. Adobe Premiere Pro has a number of built-in audio effects to help you improve the sound of your project.

Most effects are available for 5.1, stereo, or mono clips and can be applied both to clips and separate tracks.

Let’s look at the most often used filters.

The sound is superimposed on itself with a little delay so that it gets sonic warmth.

This effect has several presets that can be further adjusted.

The Balance effect lets you control the relative volumes of the left and right channels.

This effect is available for stereo clips only.

This effect has no settings window and no presets. The Bandpass effect removes frequencies outside the specified range of frequencies. You just need to specify the width of the frequency band. Bandpass can work for simulating telephone conversations, for example.

The Bass effect lets you increase or decrease lower frequencies (200 Hz and below).

A Flanger effect plays the original sound and adds a delayed signal to it. Delay time varies from 1 to 10 milliseconds. 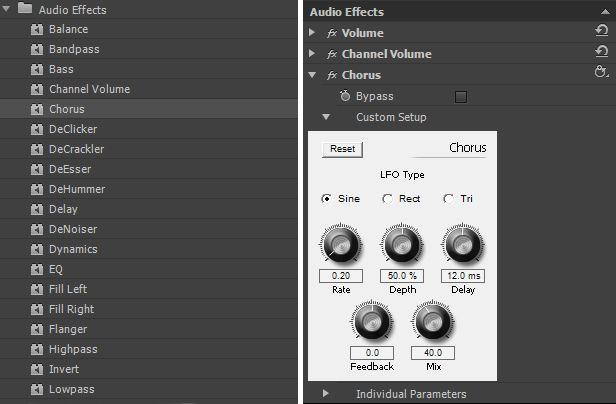 This effect also plays the original audio with multiple delays but then adds several timbres to the original sound. 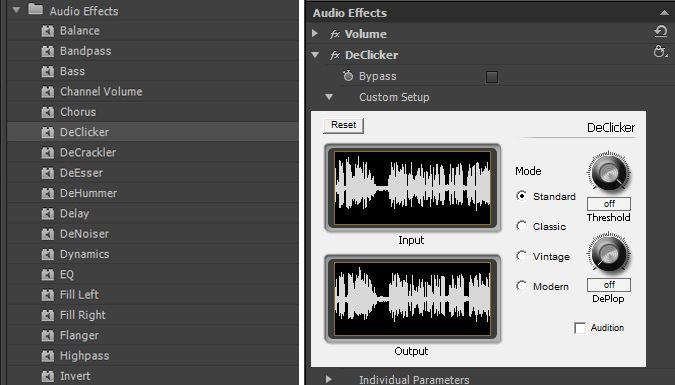 You don’t need to adjust these effects.

Use Distortion Effect to make the sound gritty and saturated. It works well for amplifying emotions (growling, screaming).

This effect is for the equalization and densification of sound. It also can cut out high frequencies. 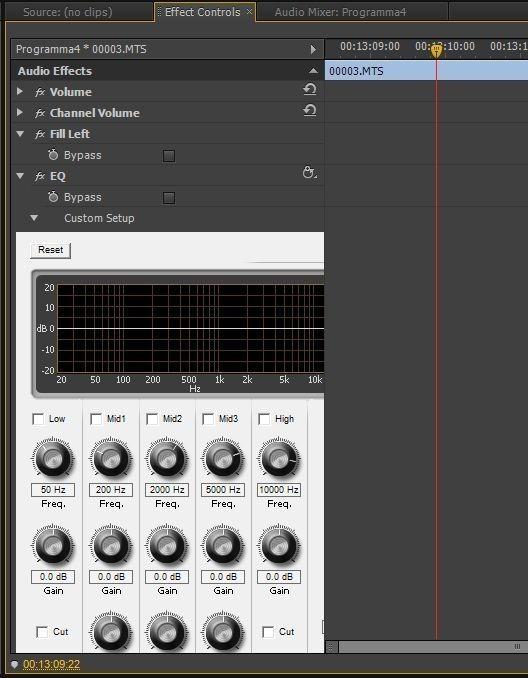 This effect processes the sound by increasing the amplitude of frequencies around a certain central frequency.

Center - specifies the frequency in the center of the chosen range.

Q - specifies the width of the frequency range that will be affected.

Gain – specifies the amount by which to increase or decrease a frequency band (between -20 and 20 dB).

Phaser is an audio effect caused by mixing a phase-shifted by a varying degree sound with the original signal. The phaser effect is similar to Flanger. The result of both effects is a distinctive complex non-stationary signal which comes out as a surround, floaty, ethereal sound.

Despite the similar functioning of these effects, the output sounds differ from each other.

The Pitch Shifter effect adjusts the pitch of the incoming signal.

It has presets which allow for deepening high voices or increase the pitch to make the voice sound cartoon-like without affecting video playback speed.

The Reverb effect adds ambiance and warmth to the audio by simulating the sound of the audio playing in a room.

You may ask why to use the Volume effect when the volume can be adjusted using the sliders or audio gain tab in a right-clicked drop-down menu. The case is that if you have already edited the volume in the above kinds of way and after that apply audio effects then further editing might disrupt the settings. To avoid this, use the Volume effect.

There are plenty more audio effects in Adobe Premiere Pro so don’t be afraid to experiment and find that very sound that your video project needs.

One of the easiest and most useful effects in Premiere Pro, often budding bloggers or video editors shoot on cheap equipment or also on the phone without any nice quality microphone. Hope for a good and clear sound in such a case is pointless. Or you had to use a non-standard microphone from the camera, what to do in this case?

DeNoise is an integral effect that helps to noticeably reduce excess noise in the background and bring your track closer to the studio sound. Select the 'Effects' tab and select 'Audio effects. Type 'DeNoise' in the search box and drag it onto your track. Under the 'Effect Controls' tab click 'Edit', under custom setup for 'Denoiser'. You can start at -16db and experiment further, also work on the low and high noise separately. You can do this by clicking 'edit' in front of Custom Setup.

We advise starting with -10db tweaking until you get to clean sound in your audio track.

If your project lacks a well-tuned sound, the Mastering tool is your must-have.

For a perfect sound, you need to equalize the volume between -12db and -6db, it is for the plugin to give an increase or decrease in the sound ceiling of your track, thereby setting the sound output amplification. 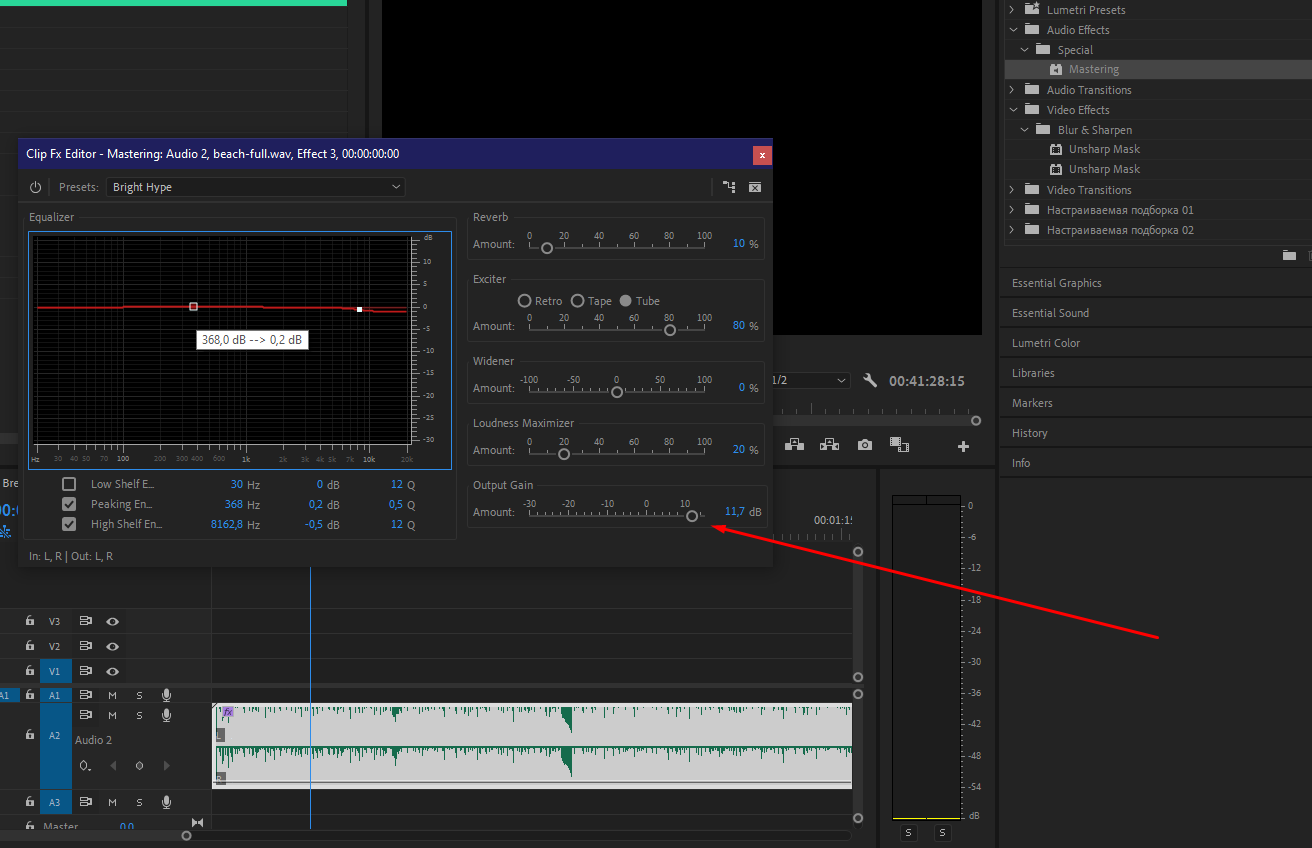 If you are not heard well, set the output gain to 12db, in some cases up to 15db, the plugin itself gives different opportunities to increase or decrease in different segments with different frequencies, remember that the ideal sound is within the orange and red volume zone.

Lowpass is a simple effect that is often used in movies during showing military action. As an example:

It perfectly enhances the effect of what is going on by making the sensation of real sound in the character's head distant and muffled. As if the character was stunned and there are explosions and gunshots nearby. It can also be used to evoke the feeling of playing in another room or a voice inside the head.